Cartel is an upcoming web series releases on ALTBalaji on 20 August 2021. This series is produced by Ekta Kapoor and distributed by ALTBalaji. Cartel web series will be streaming on both ALTBalaji and MX Player.

Actress Supriya Pathak will be seen in a lead role in Cartel web series. Along with that Actresses like Monika Dogra, Divya Agarwal, Pranati Raj Prakash, Aditi Vasudev and others will be seen in the series.

As mentioned in a Cartel’s trailer “Set in Mumbai, Cartel tells the story of 5 crime-lords based in different areas of the city, how they carry out their illegal operations & how political, judiciary & corporate bodies are closely intertwined with the underworld of contemporary times. The five gangs have lived with mutual cooperation and peace because of a treaty put forth by Rani Mai years ago. However, a sudden turn of events creates an imbalance between the gangs, and what happens next is what Cartel is all about! Filled with twists, turns, deceit, manipulation, action, and a lot of drama.” 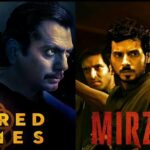