In the film ‘Dobaara’, Taapsee is bringing a suspenseful and thriller story for the audience. Know how this film is. 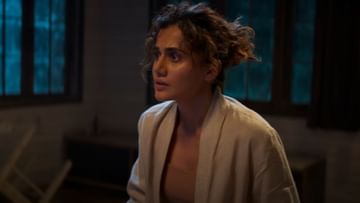 Taapsee Pannu has made a comeback with a strong style after ‘Shabash Mithu’. After playing Mithali Raj’s biopic, Taapsee has played a thriller character. A character that the audience might not even think about. Yes, Taapsee Pannu’s suspense thriller film ‘Dobaara’ is going to be released on August 19. We are talking about the character played by Taapsee Pannu from this film. The Anurag Kashyap directorial film Dobara is a Hindi remake of the Spanish film Miraj. We tell you about this film woven in the dark theme.

How is the story of the film?

The story of the film Dobara is shown in Pune from 1990 to 2020. In the film, there is a 12 to 13 year old child named Anay. His mother is an architect, who is designing the hospital at the beginning of the film. Meanwhile, Anya sees a fight taking place in his neighboring house. He first tells his mother about it. But later he himself goes to the neighboring house. In the house he sees the body of a woman. Anya panics and runs home. While leaving the main door of the house, the fire brigade car crushes him. Anay dies at the beginning of the film.

One thing to note in the film is that after every storm, there is some untoward incident. After an interval of about 15 to 20 minutes, there is an entry of Taapsee. The film now moves to the time of 2021. Taapsee sees the same child on her TV, who was crushed to death by a fire brigade vehicle many years ago. Interestingly, both talk to each other from TV itself. After so many years, the past repeats itself again. Anay again tries to go to the neighboring house, but this time Taapsee saves him. This is where the twist in the story begins.

Murder mystery is in the story

Murder mystery has been shown in this film full of thrill and suspense. Which continues from beginning to end. There is also a plot murder in the story, which Anay sees.

All the characters have done a strong acting in the film. Pavel Gulati, Taapsee Pannu and Saswata Chatterjee have played their characters in a strong manner. The way Taapsee has done her acting. Taapsee is also playing the role of a doctor in this film. The way she tries to make her believe, that sentence is just wonderful.

see or not see

to film Anurag Kashyap Direction has been received. The purpose of making Dobara is that certain genres of films will be promoted in the country, so that the audience can understand at their discretion. The story of the film is a bit crooked. But if you are fond of thrillers, then definitely watch the film ‘Dobaara’.