Many people trolled and called Sushmita Sen a gold digger when it came to the fore of dating Lalit Modi, is this the reason that instead of Lalit Modi, her ex-boyfriend is spending time on the surface of Sushmita’s family. 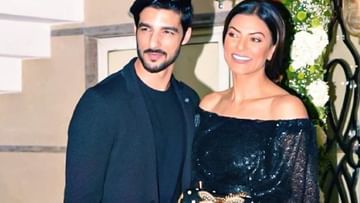 It is said that the relationships seen in the film world are very strange from the relations between ordinary people, here it is common to get divorced, breakup, but it is more common than that, maintaining friendship with your ex and everything Forget partying with them. many times bollywood star Hrithik Roshan After separating from his ex-wife Sussanne Khan, he has been seen celebrating the party together with him. So there are many such Bollywood stars in these Bollywood film industries, who go for a walk with their ex. Now the name of Sushmita Sen has also been added to the list of these celebs.

I LOVE IT WHEN SHE COMES LIVE TBH❤😭 also sushman content ahhh I love them both smm she’s looking so pretyyyy and her vibes are always so energetic!! #SushmitaSen pic.twitter.com/w18zRWlUP0

Shortly after Sushmita announced her break-up, Lalit Modi announced her relationship by posting a photo with Sushmita Sen. Sushmita Sen’s elder daughter Rini Sen has posted many photos of the party along with cute posts on her grandmother’s birthday. In these photos, his mother maternal uncle and television’s famous couple Rajiv Sen, Charu Asopa, his daughter Gianna are also seen.

Along with the photos of the party, Rini wrote in the caption, Happy birthday to the best and best nanny, we all call her Nanna. You are strong, kind and with the biggest heart. We all are very lucky to have you in our life, I pray that you always stay healthy and happy.

In the pictures, Charu and Rajeev, who had recently reconciled with each other amid divorce rumours, are seen happily spending time with the family. Let me tell you, Sushmita recently web series arya After returning to the world of acting, his series was highly appreciated.