Livi’s Model ‘Nick Kamen’ passes away at the age of 59. The news was confirmed by singer Boy George on social media. According to some reports Nick Kamen’s died on 5th, May 2021 after developing bone marrow cancer.

Kamen was first brought to the public’s consideration in 1984 when Ray Petri highlighted him on the front page of The Face.

Singer ‘Boy George’ paid tribute to Nick on Instagram he postes the throwback pictures of both. 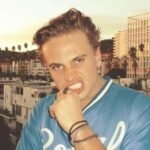