The film Middle Class Love, directed by Ratna Sinha, has been released in theaters on 16 September. Preet Kamani, Manoj Pahwa, Kavya Thapar and Esha Singh are among the lead stars in this film. 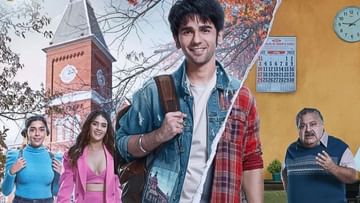 The film Middle Class Love, directed by Ratna Sinha, has been released in theaters on 16 September. Preet Kamani, Manoj Pahwa, Kavya Thapar and Esha Singh are among the lead stars in this film. The producer of this film is Ratna Sinha’s husband Anubhav Sinha and Zee Productions. The music for this film has been given by Himesh Reshammiya.

The story of the film starts to be understood to a great extent from the name of the film itself. What are the difficulties a Hindustani middle class family goes through and how does it fight. The film revolves around UD aka Preet. A boy who is fed up with middle class life. He feels that love is the only thing that can get him out of all this.

Talking about the story, there is nothing new in this. Same middle class cliché story. A parent, their two sons, the elder son understands the responsibility quickly and the younger son is worthless. He has to get out of all this. He is bound to be a rebel, until life does not slap him and he does not become wise due to one mistake, then he keeps on doing it carelessly. All these things connect the film watchers in a very good way. The story of the film may be cliched but it has been filmed well on screen.

Best dialogues of the film

All the characters have done excellent acting in the film. But in the midst of all this, Manoj Pahwa, who is playing the role of Preet’s father in the film, does not let anyone wander around in terms of acting. His amazing dialogue delivery and every single film scene is presented as if it has actually happened to him, it is amazing. Rest of the characters have also acted well. Acting is also one of the reasons why you feel connected to the film.

Excellent comedy is also seen in the film in between. Especially from Preet’s side, how jokes happen between a father and a son. UD finds its humor in everything. The songs of the film are also fine. Himesh Reshammiya has composed the songs in the film. Rap songs have also been used in the best way. Which you will enjoy listening to.

You must watch this movie once

Overall, the film is excellent, which can definitely be seen once. After a long time, such a film has been seen, after watching which your eyes will become moist. It can definitely be said that Indian cinema is making good films. Constantly trying to show good cinema but it is not visible. The real problem with such films is that no big name works in them.